Dominic Hills has produced the latest in a series of images inspired by the opening of one of Bruscambille’s nonsense speeches. Following his prints of pregnant women pissing their maidenhead and dogs shitting tar as well as frogs spitting out cooked goslings, now we have cats guzzling a confection of turds (‘les chats gosillent le diamerdis’). This ‘diamerdis’ – a confection of turds or pilgrim’s salve, both translations from Randle Cotgrave’s essential Dictionarie of the French and English Tongues of 1611 – alludes to the very real practice of using faecal matter in contemporary medical treatments. Indeed, in Rabelais’s Pantagruel, Panurge sews Epistemon’s head back on with the aid of diamerdis powder, which he always has about his person, and which helps cure Epistemon of his beheading. In Bruscambille, the ‘chats’ continue the tongue-twister of ‘les chiens chient’. In any case, it is scarcely surprising that some of the animals in Dominic Hills’s image seem decidedly unwell. 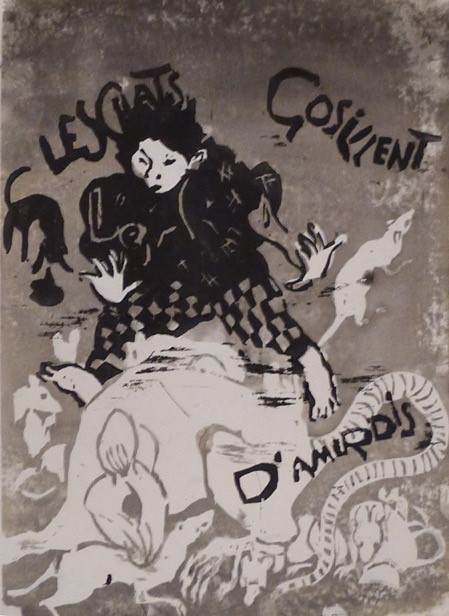